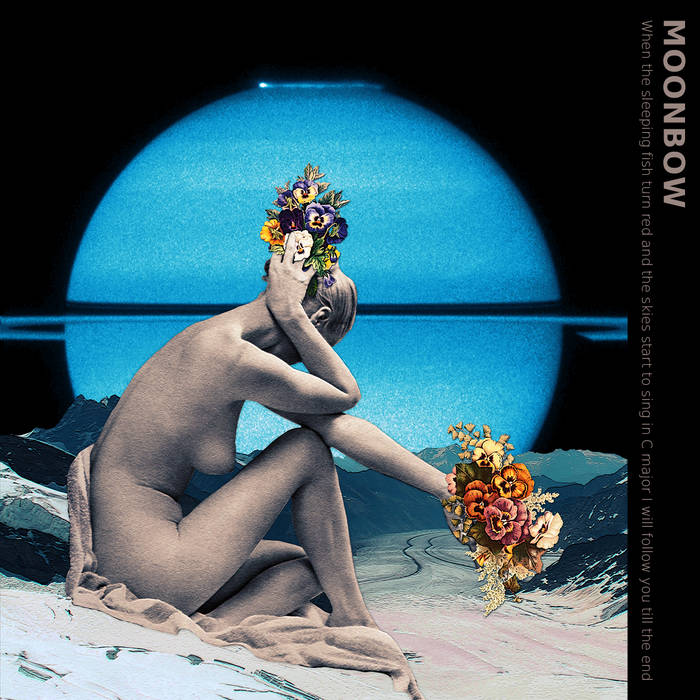 MOONBOW is an international septet playing freedom music full of pure energy, levitating improvisations, ecstatic grooves, and unforgettable themes. The band consists of seven accomplished, internationally recognized improvisers from five different European countries. It was foundedin early 2015 in Copenhagen, Denmark, where their paths suddenly crossed. The music for MOONBOW was composed by the bass player Tomo Jacobson, but the imperative of working with the bandwas to give the band members freedom to shape the material their own way, fully engaging their unique, strong, and diverse creative intuitions. This way MOONBOW's music always stays alive and forever keeps surprising audiences around the planet Earth.

MOONBOW is into, about, and for freedom. It was created and it isexecuted with an intention to express the conviction that we are allfree within, and to inspire earthlings to freedom.

"This is an album with a big heart, beating strong, and every single sound on this album is served up with an enthusiasm that holds nothing back. This is what unbounded creativity sounds like. (...) This is one of the most exciting albums I’ve heard all this year."

"At times as vulnerably and gorgeously emo as the Dirty Three."
The Good Stuff 2016
(Bret McCabe - All People Sideways - USA)

"Tomo Jacobson’s Moonbow balance between free-form minimalism & an eclectic overflow of extrovert improvisation. Addictively involving stuff and therefore most strongly recommended!”
The Best of…2016
(Jazzismus Was There... - Greece)

"There are some very good things happening musically in Denmark, and MOONBOW is another example."
Favourite Releases of 2016
(One Man's Jazz - continuation of Taint Radio - Canada)

"Like all true artists, Jacobson is on a spiritual quest and the music on the impossibly titled album is filled with hymns and anthems of wild beauty. (...) the leader whose big tone and earthy bass riffs carry the music forward. Jacobson belongs to the tradition of great composer-bassists like Charles Mingus and the aforementioned William Parker. His music is both free and structured, with catchy motifs and solid swing. There is a certain wildness to the music, but as Parker notices, without any anger. Instead, the music whispers, screams and sings with joy, catching an impossible poetic paradox, like the transformation of the elements where water becomes air whose vibrations turns into earthy music filled with fire."
4/4 stars
(Jakob Baekgaard - All About Jazz - Denmark)

"Jacobson's compositions are strong, straight through, and the ensemble is a wonderful, untamed beast. It sound sort of like one of Charles Mingus' small ensembles, if the iconic bassist/composer had embraced—along with jazz—the sounds of heavy metal rock. (...) A distinctive and appealing sound."
4/4 stars
(Dan McClenaghan - All About Jazz - USA) ​

"The pieces that Jacobson has produced here are winding and elaborate, and they require a great deal of attention on the part of the listener. However, the rewards to be reaped are great - like every maze, a prize awaits the patient seeker."
4.5/5 stars
(Derek Stone - Free Jazz Blog - USA)

“In spite of the incredible power of a large ensemble, the music is completely devoid of conflict and wonderfully illustrates the concept of collective improvisation, based on mutual respect and almost telepathic communication between the players. There are many superb individual statements by the musicians involved, but the collective result is definitely more that just a sum of its ingredients.”
(Adam Baruch - The Soundtrack Of My Life - Israel/Poland)

"The six-part suite «When the sleeping...» indeed dances and grooves. The septet sound as small big band, playing with intense passion and conviction but also with a great sense of freedom (...) Moonbow compassionate music is not shy of sounding melodramatic on «And the Skies», emotional on «In C Major», and even sentimental as on the introduction of «Start to Sing» or and funky and soulful on «I Will Follow You» and «The End»."
(Eyal Hareuveni - Salt Peanuts - Israel/Norway)

"Mr. Jacobson obviously spent time writing and arranging these pieces to keep this ensemble on their toes and focused. (...) I especially dig the way Tomo writes for the saxes, often as one harmonies force with strong interaction from the guitar and piano as well. What I find most surprising is that certain solos embrace a more modest, thoughtful aesthetic without going to far out, hence a more laid-back vibe occurs when you least expect and then they expand into more adventurous territory. I get the feeling that is going to take several listening sessions before I figure out where all those buried treasures are lurking."
(Bruce Lee Gallanter - Downtown Music Gallery - USA)

If you like When the sleeping fish turn red and the skies start to sing in C major I will follow you till the end, you may also like: